· Gas on thanksgiving cheapest since 2008 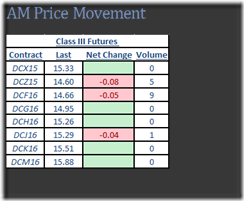 Yesterday’s Thanksgiving week trade was dominated by a spot market that saw the spread between blocks/barrels widen another 3 ¾ cents to settle at 10 ½ cents, but given recent volatility in the spread not at prohibitive levels.  Participants were very quickly looking towards cold storage. 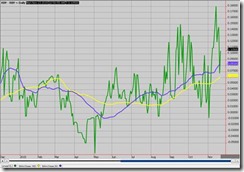 We saw slight weakness on dwindling volume as many worry about thawing turkeys and holiday prep.

Cold storage got the turkey’s gobbling as we saw a surprise build in butter stocks.  Total Cheese also saw a larger than expected build up 15.4% vs. LY with pre-report expectations being 13.6%.  The Other cheese category had the largest build, up 21% vs LY.  Late afternoon trade held little reaction to the report.
Whey continues to lead the market lower with December dropping below 24 cents yesterday.  The reaction to cold storage is yet to be determined as domestic demand is still leading the charge.

The strong price differential between 1st half and 2nd half class III warrants a strong discussion about additional weakness that could occur especially in the 2nd half of the futures curve.

We expect class III, cheese and whey to open steady to lower 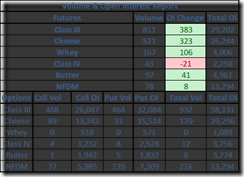 The Class IV market firmed up as spot butter trickled 1 ½ cents higher on 1 trade to $2.90. That was the first trade registered for the month of November! Butter futures were bid aggressively as they are deeply discounted to the spot price. Futures were bid all the way out through 2016 in the upper $1.90’s which adds credence to how tight the market is perceived to be. After the cold storage report revealed October butter stocks were up 21% vs LY, futures shrugged off the perceived bearishness, and were stronger overnight. Apparently some retailers have stepped back into the market for last minute buying as the dip in prices never materialized.  Interesting to note, according to USDA’s retail report retailers have been promoting much more aggressively this year despite higher spot prices.

Nonfat continued its grind lower as the spot session trimmed a ¼ cent to 73 ¼ on 1 trade. Nonfat futures drifted lower on light volume. In options land the Feb 16 Nonfat $0.80 puts /$1.04 calls collars (selling puts/buying calls) traded over 50 times for 1 ¼ cents. The NZX WMP futures were stronger overnight and 2016 futures have added a solid $200 premium across the 1st half over the past week since last week’s GDT beating.

Overnight the WMP futures continued to show strength trading from 10 to 70 higher and even dragging SMP along with Jan and Feb both higher as well. We have our doubts that the next GDT auction will show higher pricing but futures are reflecting that belief.

We expect NFDM and butter to open mixed today 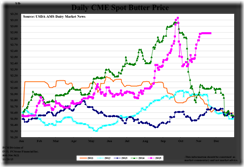 Markets started lower with corn leading the way after the results of the Argentinian election was seen as favorable to additional exports expected out of the country.  President elect Macri has pledged to bolster a very weak Argentinian economy.  One of his first expected acts is to remove the high export taxes currently in place.

The market rallied late in the day to finish higher as the funds estimated to have bought 8000 corn, 5000 beans and 7000 wheat.  Technically we would expect additional strength but fundamentals still warrant softer prices as export inspections are still running 23% behind last year for corn and 16% behind for wheat.

We look for grains to open mixed with corn and wheat slightly lower, soybeans slightly higher 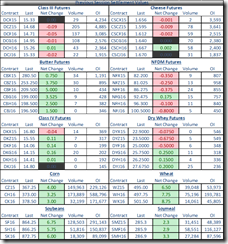