The big news this weekend was the failure of oil producing nations to come to an agreement on freezing production in October during the Doha meeting Sunday. Crude oil futures dropped more the $2.50 a barrel on the news last night but rebounded $1.00 to $1.50 lower this morning. Interestingly, this failed agreement isn’t a radical change fundamentally. All parties, with the exception of Saudi Arabia and Iran, are at capacity anyway. The key to us is how this failure will impact market sentiment over the next few days. If crude is able to push higher, that tells us that money flow into commodities is still strong.
Class III futures from June forward edged their way higher Friday as they tested the high price prints of earlier the week on moderate volume. Over 1,300 contracts changed hands as the Class III buy side was rather resilient throughout the day. Cheese futures played along, rising modestly but on less volume. 268 cheese contracts traded making it pretty clear that any agenda there may have been on Friday was more focused on the class III side of the ledger.

We’ve talked about money flow into commodities and the grain rally has also taken some pressure off of milk prices here lately. One area that doesn’t get much respect today, but will going forward is: weather. The upper-Midwest has provided ballast for some if not all of the milk production losses out West over the past year. That balancing act comes into question when we start discussing hotter summertime temperatures to come. There have been more discussions of a La Nina event to follow this winter’s El Nino. La Nina would bring about a very warm, drier Midwest summer.
In this case, however, it seems to us to be a bit early to for weather to take a significant hold of the class III market. Moreover, we’re still dealing with a spot price that continues to trade at a steep discount to futures. Block cheese prices were up 0.75 cents on the week, to close at $1.4275/lb., in a market that saw 4 loads change hands. Barrel cheese ended the week 0.75 cents lower at $1.4100/lb., with 17 loads traded.

Another piece of information that has us somewhat less concerned about an immediate slowdown in milk production is the recent trend on weekly cull rates. For the week ending April 2, dairy cow slaughter under federal inspection was down 9.7%, at 51,300 head, compared with the same period the previous year. Year-to-date slaughter levels are 1.4% lower than 2015 levels, with 835,200 head slaughtered.

Although we tend to see slaughter rates decline this time of year, the declines we’re seeing lately are running well ahead of the past five years. Perhaps a slowdown in calving coupled with a higher than normal replacement cost has led to desire to hold onto animals here over the past few weeks. Which leads us to scratch our head and ask: are the USDA’s heifer replacement numbers right?\ 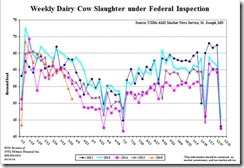 We’ll start off with NFDM this morning as that futures market has seen some significant price strength over the past week. Most 2016 contracts finished between 1.00 and 3.00 cents higher Friday. Although volume was somewhat subdued (143 contracts), the price action is showing larger signs of technical strength lately. We become accustomed to intermittent price rallies on NFDM futures only to see the market swing lower once again. But in this case the futures were able to push higher last week and the spot call seemed to follow off of recent lows. This could be the beginning of a more material move of Class IV over Class III, but it is too soon to tell today. We took a look at the August contract below, but similar patterns are seen in most 2016 contracts.

Butter futures stemmed losses by mid-week and found modest support by Friday closing mixed on moderate volume (175 contracts). Open interest Friday rose by 124 contracts under good two-sided trading at current levels. Commercial buy side interest was a light feature, but the stability in spot butter around $2.07 seems to have halted the futures decline. We expect, however, that both spot and futures will once again begin to work modestly lower this week.

We look for NFDM, Butter and Class IV to open steady to lower.

The grain complex was mixed overnight after last week’s short-covering rally (at least for corn). There doesn’t seem to be a laundry list of reasons for corn to rally and planting weather is near perfect, but that didn’t stop the funds from driving price higher last week as they covered short positions. We can blame some of it on the recent rally in crude, which has now been stopped dead in its tracks. But the larger share of the spec covering in corn has been driven by the soybean rally, which continued if only modestly overnight. Soybeans have led the way higher for the grain complex as the trade is concerned about the argentine crop due to problematic weather there. We expect that the recent barn-burning rally for grains is a little overdone for the moment, but the overall trend is turning higher.
Corn is expected to open 1-2 lower, Soybeans and Wheat are called 2-4 higher.