· Oil prices rebound from two-month low ahead of OPEC report

· Arla launches milk brand to give back to its farmers http://goo.gl/3zhyOg

· Japan to craft stimulus by end of July, may issue construction bonds http://goo.gl/GlazWO 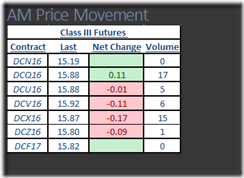 It was a very quiet open to the week for the class III, cheese & whey markets. After the explosion of spot volume on Friday, yesterday’s session had no activity to speak of. With the lack of anything to go off of futures traded extremely light volume of under 400 trades for class III with settlements lower by 1 to 19 cents for the 2nd half 2016 contracts. Cheese was also relatively light on volume with just over 300 trades taking place, highlighted by the 2017 pack trading 13 times. Prices were mostly lower there as well. With the light volume trade news was also light for the most part. One release that caught our attention was the NRA report of Restaurant Performance Index coming in at 100.6 in May down from 101.6 in April and at a 3-year low.

Weather is the other headline maker out there and while temps have been mild of late the forecasts show some significant heat in the offering for next week.

We will have to see if this comes true and how significant an impact it can have on milk production. For now it does appear to be a short lived heat spell and most maps, despite a warmer/drier lean, don’t show what we would call a troublesome trend for crop production to this point.

We look for the Class III complex to open lower. 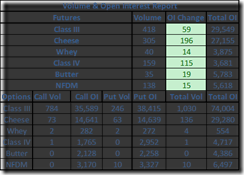 While both the block and barrel markets were silent to open the week the class IV markets saw a little action with the NFDM market up ¾ of a cent on 2 trades and the butter market down ¾ of a cent on a single trade. There was, relatively speaking, better volume for class IV. Though butter traded just 35 times, price movement was significant with most months from Sept through March 2017 lower by 2.000 to 4.950 cents. We’re in the summer doldrums for butter which generally doesn’t see a seasonal boost in pricing until we get nearer the Aug- Sept time frame.  Despite the increased temperatures we’re not hearing anything overwhelming about ice cream demand thus far. As high as the current prices are, we wouldn’t be surprised at all to see buy side support step back in if futures or spot can be had in the $2.20’s.

Despite the uptick in spot NFDM, futures were under pressure as the significant trading volume of over 130 contracts drove prices lower yesterday. Most of the selling seemed to come on the forward curve where a significant cost of carry is built into the marketplace. August through January contracts were 0.975 to 2.375 cents lower on the day. We’ve seen the cost of carry come out of the cheese market after a sizeable run up, and NFDM appears to want to move that way, however the size of the rally on spot just hasn’t been sizeable enough to this point. Given what we hear from a fundamental standpoint we have our doubts that it can even occur as most seem to feel a sharp price increase from current levels just isn’t in the cards. We’d look for this market to continue to struggle to move much above the 90 cent mark for the time being.

We expect NFDM, Butter and Class IV to open steady/lower.

The grain complex was higher overnight into Monday morning as the market continues to press the longer term weather forecasts as potential risk to the crop. The rally wasn’t made to last however, and by the end of the day futures were lower across the board. Corn fell 7 cents in December to $3.5550, beans were down 2.75 cents to $10.55 & Wheat was down 4.50 cents in September to $4.3050. After the close crop condition ratings were released showing corn at 76% good/excellent up 1% from the prior week and better than expected. Soybeans were rated 71% good/excellent also up 1% from the prior week and better than expected. USDA releases their July S&D later this morning at 11 am Chicago time so in spite of the better than anticipated crop condition ratings that will hold the markets focus today. Estimates are below.

We look for corn and wheat to open steady to 3 lower, soybeans up 3-6 cents. 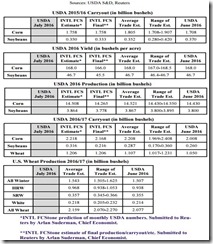 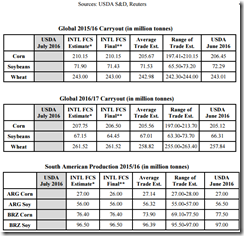 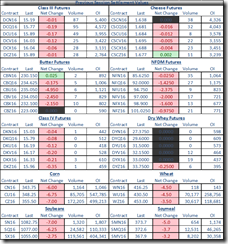