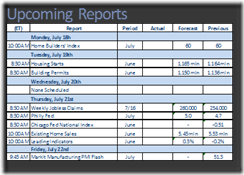 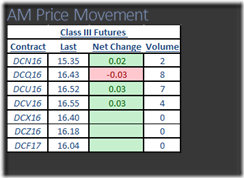 Class III and Cheese futures closed the week on a higher note aided by spot blocks ($1.66/lb) and barrels ($1.745/lb), which both tacked on another penny. Barrels bids continue to lead the charge in cheese, but sellers have not backed away as 8 loads changed hands on Friday. Barrels have been the talk of the town, with many speculating a tightness in the cash market. However, when looking at weekly NDPSR volumes it may come as a surprise that barrel volume is not historically high. Block volume on the other hand has been strong for the last several weeks. The discrepancy in volume and price makes the current block/barrel spread all the more puzzling. NDPSR volume only tracks fresh sales, so what we could be seeing is larger than expected sales coming from storage.

Daily volume for Cheese and Class III futures starting last week off on the lower end but steadily increased until normal levels were attainted on Thursday and Friday. Those two day also coincided with higher prices. The late week rally was thought to have been caused by extended weather forecasts calling for extreme heat throughout most of the Midwest. The Northeast and West have been hit with some hot, humid weather already this year, yet anecdotal evidence points to continued strong milk production. Generally better cow comfort, advances in cooling technology and maintaining quality feed rations are likely responsible.

Weather remains a concern this week. The Midwest may not see record high temps as early predicted, but three consecutive days of 95+ remain in the forecast. Class III and Cheese futures are approaching their June highs, and have a shot at testing them this week. If the Cold Storage and Milk Production reports confirm June’s move higher new highs for 2016 could be made. The forward curves for Cheese and Class III have already shifted from a carry market to an inverted market, which could be looked at as a bullish indicator. However, it is our belief that additional fundamental confirmation is needed for a move higher. 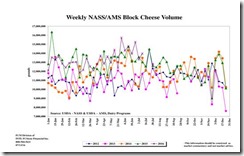 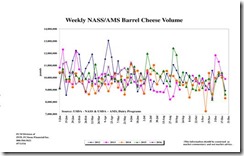 We look for Class III and Cheese to open steady to lower, Dry Whey firm.

Spot butter moved up to $2.32/lb. Friday on three trades. With consecutive higher spot market futures erased all of the losses from earlier in the week; netting a price change of almost zero from the start of July. The butter market has been in a consolidating pattern for almost a month now. Manufactures are content with current inventory levels, and although additional loads can be bought, demand from ice cream manufactures and retailers remains strong. May commercial disappearance for butter reported gains both YoY and vs. previous month, confirming the aforementioned strength. Inventory levels however are 22.5% higher than they were in 2015, which ought to be concerning to market participants. Cream multipliers remain low, effectively nulling supply concerns.

The NFDM market was a quiet one last week. One trade were registered for futures on Thursday. Spot closed the week down 1.75 cents vs. previous week. We would expect that NFDM will be back from its unexpected vacation last week. The current bid/ask spread does not give a good indication of price direction. However, reports are out that the US is adding powder production, as well as NZ adding to its NFDM line. Added supply, coupled with a stronger dollar and lower crude should not fare well for NFDM futures this week. Ultimately, NFDM looks to be in balance around current price levels for the time being.

We expect NFDM, Butter and Class IV to open steady/lower.

Corn is trading around 2 cent higher in the overnight whereas beans are down around 10 cents. Most of the Corn Belt experienced rains this weekend, but extremely high temps are still a concern for corn pollination. Crop progress is expected to show slight gains in the overall conditions. Friday’s CFTC report came with a surprise for corn. Estimates for managed money funds positions were off 90,000 contracts, shifting their net position to short for the first time since April. Little has changed on the funds position in beans, as managed money remain net long, around 130,000 contracts. South American corn harvest continues to lag behind. Argentina is now reporting 48% harvested compared to the average of 70% by this time. Brazil is also slightly behind, coming in at a little over 50% complete. The short term trend still remains bearish in grains as continued rains will be beneficial to crops. 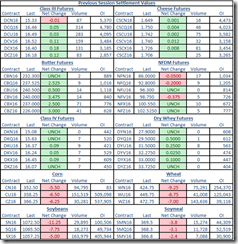